About Me (tell us a little bit about yourself):
Hello All the Beautiful SGI Members.
What a great idea this social network is !

Á Little Bit about Moi:
I started my practice in Los Angeles California in May of 1995.To support myself, I have always worked different jobs and for other people. I started to teach Spanish within my own small business that I have devised called, Escuela Español, http://www.escuela-espanol.com. I have had this business for 5 years now and it's the best thing I could ever do in my life because it allows me to be independent and create value while enjoying my profession.


I also realized more profoundly the essence of Buddhism. Some of the many qualities of the Buddha are compassion, wisdom, fearlessness and joy. This past year in September 2008, I realized a life long dream to live in London. I did this because I tapped into my buddhahood even stronger and realized that I had to make my dreams come true. I was not going to continue to wait idly while my life past me by. That was I going to be courageous in spite of my fears. I came to London for a 3 week holiday and decided to live here. When I came here I came with very little money and few friends. After a few months I developed a blog, called Sabrina's London Diaries. ( http://www.sabrinaslondondiaries.blogspot.com)

I believe my practice helps me uncover my buddha nature, my creativity, my inner strength, and my compassion. I feel like each and every year I get deeper into my practice and my Buddhahood. Each year I surprise myself and uncover some hidden aspect about myself that was there all along, but just needed some challenging and some daimoku to uncover.

I am a very passionate about the environment and I am writing a blog called Green Bohemian Living, http://www.greenbohemianliving.blogspot.com


I am very grateful to have found this great practice and to be able to develop my humanity in this lifetime. I am also very grateful to all the members, friends and family that have nurtured, loved and supported me.

I am proud member of the SGI. I am really happy to dedicate my life in someway to the fulfilment of Kosen Rufu.

Are you a member of SGI?
Yes

A Video of me reciting my Poem: I AM BUDDHA NOW

A Video of me Reciting the Poetry of Pablo Neruda

In this day and age of Mapo, it is an indubitable fact that many people in America are attracted to eastern philosophies, New Age and self-help in their search for happiness and meaning in their lives. Let’s be the first to say that chanting Nam-Myoho-Renge-Kyo works because it taps into the karma storehouse. Herein, lies a powerful and imperative point for shakabuku and propagation. Because many religions promise enlightenment and happiness via perhaps…
Continue

Taplow Court- The Buddhist Castle in the U.K. 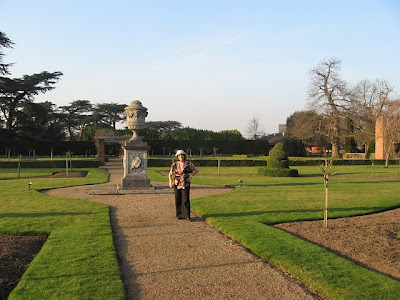 The Apple Orchard at Taplow Court

When I first came to London and didn't know a soul, I went straight away to see beautiful stunning Taplow Court, the home of SGI-UK, hoping to meet some new Buddhist friends. I know as a Buddhist that wherever I go in the…

The Environment, You and Your Home

What is it like to be a Buddhist in London: To Trust or Not to Trust

T to be a Buddhist in London: To Trust or Not to Trust
Practicing Buddhism in London, is just like practicing anywhere else in the world.But,I believe that a practice will take on the mores, values,mental landscape of a country.In the recent March 2009, Art of Living magazine (The U.K Nicheren Buddhist Magazine),there was a discussion about a survey that was taken place all over Europe.

In it was discussed the following questions:
1) Generally speaking would you say that… Continue

New is the year, new are the hopes and aspirations,

New is the resolution,

New are the spirits and forever my warm wishes are for you.

Have a promising and fulfilling new year.

Dan said…
How are you, Sabrina?

Mary White said…
Hi Sabrina! I really enjoyed your poem "I AM BUDDHA" :)

Teresa Chai said…
Hope you are fine and doing well. I just love to come to your site and listen to your recitation of I AM A BUDDHA. It is simply beautiful the way you recite it.
I also love the cute song, 'De Colore's which I can translate as 'The Colours."Beautiful song and I bet it is sung by you, too for the Spainish speaking class.
Are you also busy with Soka Gakkai activities?
Have a nice day and also the weekend ahead.

Tamlyn Edmonds said…
Just read your blog 'what is it like to be a Buddhist in London: to trust or not to trust?'. I found it very inspiring and quite poignant for me at the moment. Nam myoho renge kyo.

Cinzia Rafanelli is now a member of SGI Buddhism (.net)
Monday
Welcome Them!

Avisha Shah is now a member of SGI Buddhism (.net)
Jan 16
Welcome Them!

Kathy Nida is now a member of SGI Buddhism (.net)
Jan 10
Welcome Them!

Mahendra is now a member of SGI Buddhism (.net)
Jan 9
Welcome Them!