I think I've finally found the producer I've always been looking for.

The first song that is on my music player is the first song produced by Remi Desroques of Wave Reader Productions in Nagaoka, Japan. It was a song I wrote back in 2007, but I never got around to making a professional recording. It took many "failures" trying to record with many people to finally get it right. I hope you enjoy the new song and I hope it's just a taste of many more to come.

hi everyone. i have practicing here in the deep freeze of michigan for 3 years. can't believe i did not find this web site before. i am part of the Capitol area Diostrict and we formed the Capital Area Book Club. i just read Unlocking the Mysteries of Birth and Death which is our April book and wow what a book. for feburary we are reading Romancing the Budda. I recommend book clubs. its a great way to study . getting back into the groove of studying and computers at my age has been a wonderful… Continue

Have a disscussion meetin 2nite at my mums the subject is ' Its all about me' any suggestions??

Having good karma is important. This moring around 6:40 a.m. I was on the bus downtown. A car ran a red light and almost hit us. The bus driver slammed on the breaks JUST in the the nick of time. We all flew forward but no injuries. It pays be true and good to others. Because things could have gone a totally different way.

We are all one in the same 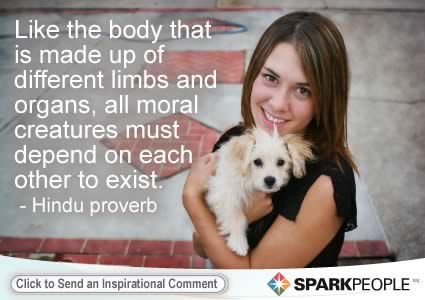 We must respect and care for one another to live harmoniously!

Just did Gongyo and i feel great!!

Sittin in my mums havin a chat!!

will def do a bigger blog 2moro!!

The Daimoku of Nam-myoho-renge-kyo / Benefit of the Daimoku

If you truly fear the sufferings of birth and death and yearn for nirvana, if you carry out your faith and thirst for the way, then the sufferings of change and impermanence will become no more than yesterday's dream, and the awakening of enlightenment will become today's reality. If only you chant Nam-myoho-renge-kyo, then what offence could fail to be eradicated? What blessing could fail to come? This is the truth, and it is of great profundity. You should believe and accept… Continue

Another review of my children's book biography, PeaceBuilders: Daisaku Ikeda & Josei Toda, Buddhist Leaders has come in. Heres part of it:

The full review is here:

I spent the Holidays in the tropical sun, three great weeks with family and friends!!!
It was my best Vacation to end 2009 and bring in 2010!
Returned to Paris in the Cold, no sunlight and snow which is very rare.
For the likes of me, I am having such a hardtime starting 2010.
I haven't abandon my Practice, Faith, or my Studies,
however I have lower my hand on my activities....
Which I'll continue at the next date!
The changes I seek in my Buddhist family, I'm… Continue

Today I went to visit my son at his group home to make funfetti cupcakes- his birthday treat. I found out that one of his weekend residential counselors is an inactive YWD who wants to reconnect and resume practicing. WHOOT! I am loving this Rock the Era movement!

I had a bit of a bad day today!! Im finding myself missing a person from my life before i became strong enough to remove him from it. I also was supposed to be attending a Young Women's Division meeting which I was too knackered to attend because i was up ill all nite. This made me feel even more down! I threw this all to the Gohonzon, the angst, the fear, the pain and the dissappointment. I was so happy to find after finishing Gongyo and over an hour of D's that I felt better… Continue

Spirit to Never Backslide in Faith / Faith to Surmount Obstacles

In the Latter Day of the Law, the votary of the Lotus Sutra will appear without fail. The greater the hardships befalling him, the greater the delight he feels, because of his strong faith. Doesn't a fire burn more briskly when logs are added? All rivers flow into the sea, but does the sea turn back their waters? The currents of hardship pour into the sea of the Lotus Sutra and rush against its votary. The river is not rejected by the ocean; nor does the votary reject suffering. Were it not for… Continue

With a bit more documentation I will also be eligible for medi-cal and food stamps. Good thing as I have been out of my asthma meds for over 2 weeks. Thanks for everyone's Daimoku.

Also, five types of eyes. Five kinds of perceptive faculty. They are (1) the eye of ordinary people, also called the physical eye, which distinguishes color and form; (2) the heavenly eye, also called the divine eye, which perceives things in the dark-ness, at a distance, or beyond the physical limits of obstruction; (3) the wisdom eye, or the ability of those in the two vehicles to perceive that nothing has independent existence of its own and all phenomena are non-substantial; (4) the Dharma… Continue

hi everybody, just thought i would leave a wee blog entry to thank you all for the welcome i recieved!!
I am so excited about recieving my Gohonzon, the 7th of feb just aint comin quick enough!! I have been borrowing my mum's Omimori (i think i spelt that right!) for the past 6 months and i think shes itching to get it back!!
Well I had better get some work done!!

This year, we are celebrating March 16 regionally.

Adrian, my partner, and I have taken responsibility for the culture. We are doing a documentary film workshop, interviews, an animated short film for 10+ youngsters, a fandance, a souldance, songs and a comical workshop. We aim to have a splendid, wonderful, brilliant manifestation to celebrate SGI Youth Day!

The First Book Review of Children's Book on Daisaku Ikeda Is In...

Son has been sprung! Now in residential school

Whew! Just got a call from my son-" Mom I'm free and I never want to go back to Juvenile Hall!" He is now at his residential school 20 miles from me. I applied for Medi-Cal (California Medicaid) for my son as an immediate need case- it may take 3-7 days before it is activated. Also he has only 3 days worth of his very expensive meds. Still chanting to breakthrough this last obstacle.

My experience in progress.

I look forward to writing more about this when I'm all the way through the darkness. My wife and I are getting a divorce and we have now moved apart from each other for the past week and a half. We have tried this before (about 6 months ago), but we both cried too much, so we couldn't do it.

Although I'm struggling so much, I have realized that unlike other breakups in the past (girl friends) this is the first time we have both decided mutually this is the best thing for both of us,… Continue

I'm looking for a meeting in West Hollywood, CA for a person to attend.

I told a friend about the practice and she would like to attend a meeting.