Smoking prohibited at the beach in Kamakura 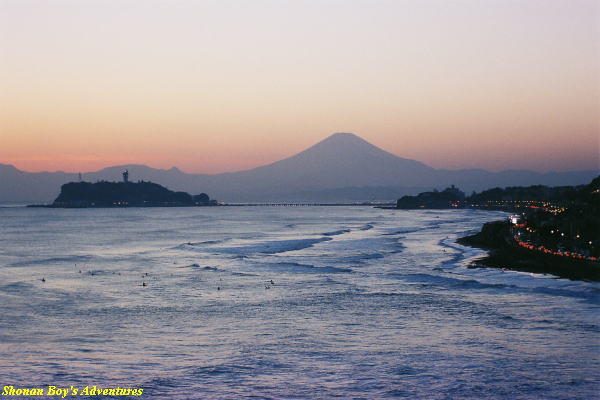 Japan’s first antismoking ordinance took effect 01APR in Kanagawa Prefecture to ban smoking in public facilities such as hospitals, schools and government offices in a bid to prevent health hazards from passive smoking.

And from May, at about 30 beaches in Kanagawa prefecture, smoking will be…

On 30th March 2010, Japan standart time. One company announced what line the richest residents is, in railways. It is residents along "Enoshima Dentetsu (Enoshima Electric Railways) !" We call it "Enoden" in shorten word.

As beautiful as the world is, it came to me... I am enlightened..

I was listening to 2 of my favorite songs; one by Brother Izzy and the other by a group called Malantial. Very native and very spiritual, to me. It was then that I saw or percieved my interpretation of true enlightenment.

We are born into this life, pure of thoughts.. we have no concept of wrong or right, yes or no or even can't and can.. we depend on others for our daily substances... we begin to build…

This is an excerpt from "Writings for Discussion Meetings"
"Practicing Buddhism- a teaching that honors all life and challenges it's practitioners to overcome
selfishness and replace it with compassion and appreciation- and sharing it with others is in itself
the ultimate way of repaying debts of gratitude. What's more when we summon the indomitable determination to repay our debts of gratitude to our mentor, who continually teaches us how to further…
Continue

I think I got it.

"As you become aware of your life’s tendency to cycle among the lower six worlds, you can develop a seeking mind to escape from them."

The whole point to CHANT is to keep from succumbing to the lesser tendencies (aka the lower worlds).

I BEEN with SGI FOR ABOUT 4MNTHS AND IM LOST ON THE WHOLE SGI THING DONT REALLY SEEM TO UNDERSTAND IT,WHEN I ASK QUESTIONS THEY TELL ME TO JUST CHANT IM GETTING THE SAME RUN AROUND WHEN I WAS IN TO CHRISTIANITY I THOUGHT THAT THIS WILL BE DIFFERENT BUT ITS NOT.I NEED TO REALLY TALK TO SOME ONE WHO REALLY UNDERSTAND AND LISTEN.


The night sounds of a mountain pass in slumber did not disturb boy Snow Mountain’s sleep until a mouse crept too close in its hunt for dinner. With a slight jerk Sessen Doji was instantly half awake, his mind,…


In the deep of black; in an undescript corner of a spiral arm, lost in the hubbub and vastness of a billion suns, a small—by galactic standards—cloud of hydrogen turns slowly
around a common center as it is carried along by the gravitic tides of the
galaxy it belongs to. Tenuous at best, invisible up close; it yet exists and is
slowly falling in upon itself.…

The Environment, You and Your Home

I need a advice

I need your advice.
My husband's (American) .Now we are staying Japan.
But his family are really serious believe Jehovah's Witnesses
he had been hate and he Join SGI '7 yeas ago-.
But now he is really not good situation in Japan,
So he stopped SGI too-.
He said now [ I don't believe any things! ]


so this times his sister send me a many books of Jehovah's Witnesses.
to me ( Japanese type )

I want to throu out -
But… Continue

Trying to reach out to shakabuku my husband who is military, has been in combat 9 times, and has pretty terrible PTSD. I kn ow this practice would help him tremendously, but I haven't been able to convince him that there's really any help for him in it.

I've been working on him for about 4 years, but I know that any veterans of combat who have "been there, done that" and who are also members could help me out soooo much with this project.

SGI USA YD in LA, Rock the Era at MLK day in the rain.

I got to see the video tonight of Youth Division in neighboring California dancing, walking, singing, playing music, beating drums, waving llags, and smiling so much people wondered why. All in the name of Kosen Rufu and showing determination in the… Continue

My Statement of Purpose for a full scholarship I'm applying for.

This scholarship will be to get my MA in Ethnic Conflict Resolution at Queens University, School of Politics, Philosphy and International Studies, Belfast, Northern Ireland.

To whom it may concern.

I am honored and happy for the opportunity to apply for this MA
scholarship in Comparative Ethnic Conflict at Queens University Belfast
(QUB). I feel everything over the last 10-15 years has led me to become
a perfect candidate for this scholarship.

"If you summon your courage to challenge something, you'll never be left with regret.
How sad it is to spend your life wishing "If only I'd had a little more courage.
Whatever the outcome may be, the important thing is to step forward on the path that you
believe is right."

I am Happy my VICTORKUMI =my SGI friend's got win!

I read this - i really impression this buddisism!-
And i really happy i am SGI !

I was reading this amazing Study Essay by President Ikeda and had to share a few excerpts. If you have time, go back and read the entire article. As always it holds profound wisdom.
"The only way for someone to truly overcome their problems is for that person to summon the
power from within"
" Buddhism is a struggle to be victorious. So are our lives and our efforts in society.
Nichiren encouraged his disciples…
Continue

Original Songs about Buddhism and Peace :) from Members

The great reunion between my son and his dad happened this afternoon! All went very well. Son's father thanked me profusely. Son had a blast. Pausing per son's clinician and taking the
next step very slowly. My son's dad told son's clinician that he would like to visit once a month on Saturdays. He also gave pictures of half-brother and -sister to our son. Another breakthrough; more changing poison into…

bully issue; monkey and human being

When I see news on TV, "bully issue at school" is not solved at all. As people try to escape this issue, I wonder why when it is solved?

To become a Buddha. Several principles concerning the attainment of Buddhahood or enlightenment have been expounded on the basis of the sutras: (1) Attaining Buddhahood in one's present form. This means to attain Buddhahood just as one is, without discarding the body of a common mortal. Also referred to as attaining Buddhahood as a common mortal, this principle was formulated by the T'ient'ai school on the basis of the Lotus Sutra. According to many of the teachings other than the Lotus…