WINDOWFULL PEOPLE I use the word Windowfull as a play on words for wonderful. It was actually a joke inspired by my dear husband about someone in my life who was irritating me. I read a lot about the…

WINDOWFULL PEOPLE
I use the word Windowfull as a play on words for wonderful. It was actually a joke inspired by my dear husband about someone in my life who was irritating me.
I read a lot about the issue of staying clear of toxic or negative people, and in one sense it seems like a good idea. But…The Buddhist voice inside of me tells me something else is going on. If we have someone in our lives who, for example, insults us or puts us down and we are affected-that is our moment to… Continue

Two men, both seriously ill, occupied the same hospital room. One man was allowed to sit up in his bed for an hour each afternoon to help drain the fluid from his lungs His bed was next to the room's only window.

The other man had to spend all his time flat on his back. The men talked for hours on end. They spoke of their wives and families, their homes, their jobs, their involvement in the military service, where they had been on vacation.

Every afternoon when the man in… Continue

From the very beginning, the girl's family objected strongly on her dating this guy.
Saying that it has got to do with family background and the girl will have to suffer for the rest of her life if she were to be with him.

Due to family's pressure, the couple quarrel very often. Though the girl love the guy deeply, but she always ask him: "How deep is your love for me?"
As the guy is not good with his words, this often causes the girl to be very upset. With that and the… Continue

A Story To Live By - Five Words

A boy was born to a couple after eleven years of marriage. They were a Loving couple and the boy was the gem of their eyes. When the boy was around two years old, one morning the husband saw a medicine bottle open.

He was late for office so he asked his wife to cap the bottle and keep it in the cupboard. His wife, preoccupied in the kitchen totally forgot the matter.

The boy saw the bottle and playfully went to the bottle fascinated by its colour and drank it all. It… Continue

A Story To Live By - A Wonderful Story of LOVE

A woman came out of her house and saw 3 old men with long white beards sitting in her front yard. She did not recognize them. She said "I don't think I know you, but you must be hungry. Please come in and have something to eat."

"Then we cannot come in", they replied.
In the evening when her husband came home, she told him what had happened.
"Go tell them I am home and invite them… Continue

Years ago, a farmer owned land along the Atlantic seacoast.

He constantly advertised for hired hands. Most people were reluctant to work on farms along the Atlantic. They dreaded the awful storms that raged across the Atlantic, wreaking havoc on the buildings and crops.

As the farmer interviewed applicants for the job, he received A steady stream of refusals.

Finally, a short, thin man, well past middle age, approached the farmer. “Are you a good farm hand?" the… Continue

Human Relationship - 45 things a girl wants but not asks for

This list making me wondering is it true or the guys haven't done enough for their beloved one.

Are you remembering this?

FNCC HERE I AM.... 3 HOURS AND ALREADY MET WITH PEOPLE,JACUZZI AND HAWK.

WILL KEEP PEOPLE POSTED DOING IN CAPITALS TO EXPRESS MY ENTHUIASM...NOT YELLING, MATTER OF PERSPECTIVE......... GOING TO CHANT NOW, THANKS TO ALL MY FRIENDS IN PASCO, TAMPA BAY , ROCHESTER...

"THE FIRST THING IS TO PRAY" 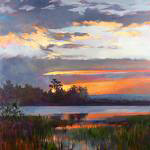 Buddhism Day by Day for 25 June
"The first thing is to pray. From the moment we begin to pray, things start moving. The darker the night, the closer the dawn. From the moment we chant Nam-myoho-renge-kyo with a deep and powerful resolve, the sun begins to rise in our hearts. Hope- prayer is the sun of hope. To chant each time we face a problem, overcoming it and elevating our life-condition as a result-this is the path of 'changing earthly… Continue

"The Seikyo Shimbun" dated June 25, 2009 released that Shelby County Government has proclaimed May 3 , 2009 as "SGI Day" as below; This is really members' hard work and effort. Congratulations! 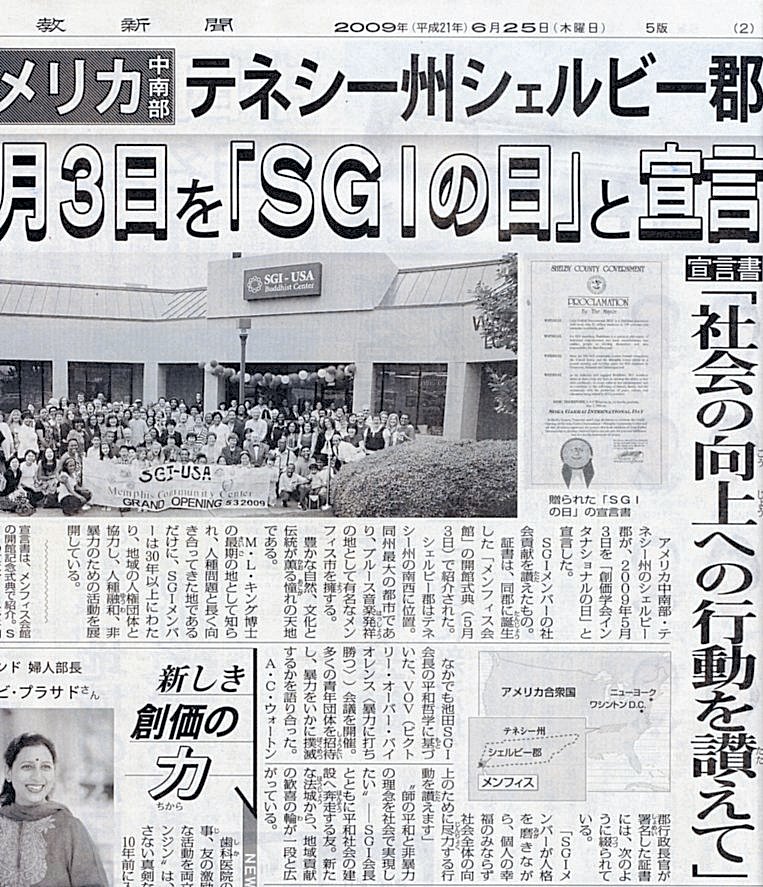 I cannot remember that anyone of "SGI Buddhism" probably post the beaytuful picture of the new Memphis Comunity Center.… 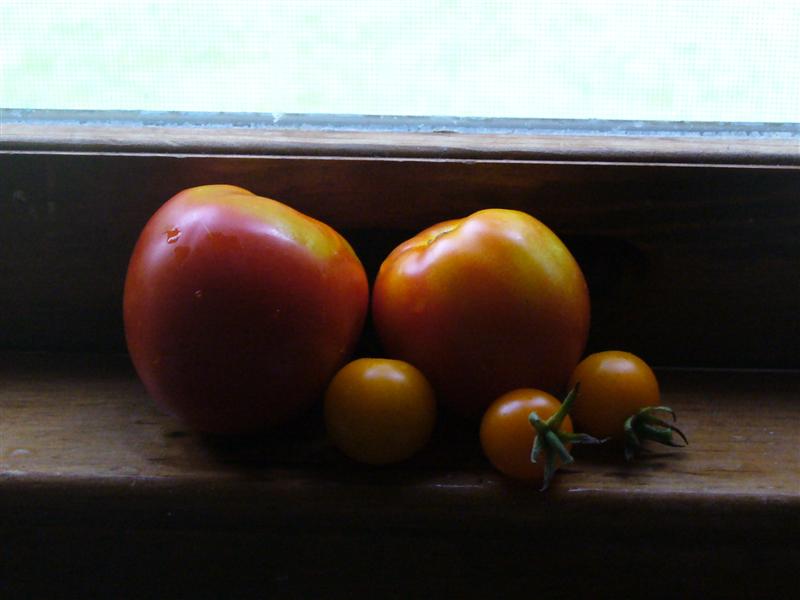 As a float bank teller I never know when I will be working. I have been working most days, thankfully! Tomatoes in the garden are doing very well!! The entire garden is growing well, except the peppers are slow to come around. My son just woke and walked in, chat later! OH! I have got to mention the baby bird I found later.

And why is he called Shin'ichi Yamamoto when his name ought to be Daisaku Ikeda??

FROM ATLANTA ARTS DEPARTMENT MEMBERS TO MARY WHITE: "Art is the cry of the soul from the core of one's being. Creating and appreciating art sets free the joyous soul trapped deep within us. That is w…

FROM ATLANTA ARTS DEPARTMENT MEMBERS TO MARY WHITE:
"Art is the cry of the soul from the core of one's being. Creating and appreciating art sets free the joyous soul trapped
deep within us. That is why art causes such joy. Art, quite aside from any question of skill or it's lack, is the emotion, the pleasure of expressing one's life exactly as it is. Those who see such art are moved by it's passion, it's strength, it's intensity and it's beauty. That is why it is impossible to… Continue

Music speaks directly to the heart. This response, this echo within the heart, is proof that human hearts can transcend the barriers of time and space and nationality. Exchanges in the field of culture can play an important role in enabling people to overcome mistrust and prejudice and build peace.

I received this at the Atlanta Arts Meeting and have been meaning to post it on my blog to share with everyone :)


"Art is the cry of the soul from the core of one's being. Creating and appreciating art sets free the joyous soul trapped
deep within us. That is why art causes such joy. Art, quite aside from any question of skill or it's lack, is the emotion, the pleasure of expressing one's life exactly as it is. Those who see such art are moved by it's passion, it's… Continue

A Story To Live By - The Blind Girl

There was a blind girl who hated herself because she was blind.
She hated everyone, except her loving boyfriend.
He was always there for her.
She told her boyfriend, 'If I could only see the world, I will marry you.'

One day, someone donated a pair of eyes to her.
When the bandages came off, she was able to see everything, including her boyfriend.

He asked her, 'Now that you can see the world, will you marry me?'
The girl looked at her boyfriend… Continue

The Summer Solstice is upon us.

I am making calendula soap now. I will load some pictures of the process, it is easier than I thought it would be.

My Tears are not my weakness

My Tears Are Not Weakness

My tears are my emotions
They show my empathies
It makes me wonder why ever a person can makes one’s tears
Tears come reflections
Tears after, move on.
Tears is a scene of touching moments
Is a moment of love
================================
Tears of my helpless despair
Makes me stronger thereafter
Tears now
Tears… Continue

What is a Buddha?

Is the fat guy Buddha, or is the skinny guy who meditates Buddha?

They are both Buddha, but different Buddhas. The fat, laughing Buddha emerged from Chinese folklore in the 10th century. He is called Pu-tai in China and Hotei in Japan, and is said to be an incarnation of the future Buddha, Maitreya. How many do you need?… Continue