A couple of months ago, I was really struggling with everything in Japan and I wrote some of you an email (my message in a bottle) and many of you sent me encouragement (thank you). I feel like I've broken through so much since then. In that last email, I was feeling like I had to get out of Japan (I was going crazy!). I think the hardest thing for me was living with my wife's parents (many people in rural Japan live with their extended families, which I agreed I would do if I married my… Continue

I never HAD a lifestyle!!!

I've never owned a car, I never lived in a BIG house, I never had a job i really enjoy doing, I never had a chance to buy what I want without ever having to worry about money.

My small salary doesn't allow me to do so.

I, too, have great aspirations of living the HIGH life.

Buddhism is about TAKING action along with sincere DAIMOKU. Noted on that.

I could keep chanting but I'm absolutely clueless about what… Continue

In a few weeks, I'll be taking my first Test and it would not be in my maternal language. How exciting is that?
No matter what the result is at the end of the day, I know that I have put my body and soul in preparing for it!!!!
studing has really changed my life, and that in it's self is my victory!!!!!

today the latest leaders were nominated. Now every division is covered with at least 1 responsible. Aaaaaahhhh, it feels like sweet vacation. I can take a rest!

What is this principle?
10% of life is made up of what happens to you.
90% of life is decided by how you react.

What does this means?
We really have no control over 10% of what happens to us.
We cannot stop the car from breaking down.
The plane will be late arriving, which throws our whole schedule off.
A driver may cut us off in the… Continue

Without the 'downs' the 'ups' are nothing!

That was the most inspiring thing I heard this week. I gave up, long time ago, hoping for an easy life. It's more interesting to chant for more strength and resiliance than no bumps in the road.

Cause we all know that a weight lifter never builds muscles by lifting pencils. And that a fish never appreciates his water environment until he's been on land for a minute or two gasping for his own (liquid) form of oxygen.

There are a slew of films with Buddhist themes from The Wizard of Oz, Singin' in the Rain, The Matrix and Groundhog Day. But a couple of years ago before I received my Gohonzon, I saw a little film called Harold & Maude. Let's just say the rest is history. The film took on a significance with me that can only be summed up in two words- Be Happy.

I was studying and asking questions about Nichiren Buddhism at the time and I couldn't get over how buddhist Maude was.… Continue 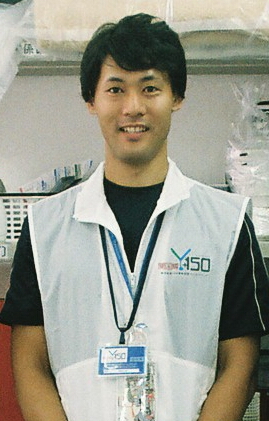 It was when I worked at the "Super Hi-Vision Theater". 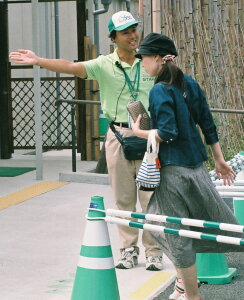 It was when I worked at the ticket booth of the Hill Side Area. 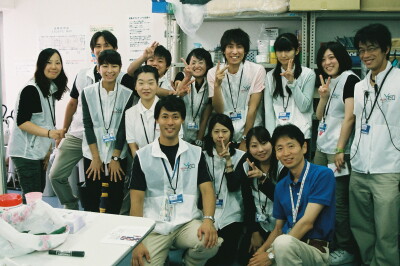 I and theater staff (bay side). I am in the front and center. 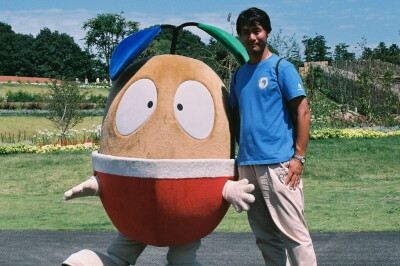 SHS finally made it to the playoffs, only to lose in the first round.

The Coach wrote to PI:
"Our ace pitcher was drafted and is gone. We are not as strong as we
were; I believe our capability is lower, but we will chant and become
a greater and more capable… Continue

The Flowering of Creative Life Force

"Today I should like to elaborate on what we mean by a
creative life. I am not about to launch forth upon a difficult
philosophical disquisition or try to give you a definitive
explanation of life. I only want to urge you to become cheerful
travelers on life's long road. Let me suggest something from my
own experience that may… Continue

Rehearse in your mind

Rehearse in your mind
"Buddhism teaches us that the individual writes and performs the script for his
or her own life. Neither chance nor a divine being writes the script for us.
We write it, and we are the actors who play it. This is an extremely positive
philosophy, inherent in the teaching of 3,000 realms in a single moment of life.
You are the author and the hero. To perform your play well, it is important… Continue

I visualize my devilish functions as gangsters in a 40's style film-noir. They linger in the shadows, in dark corners, up on rooftops, sitting in cars- awaiting for the very moment to make their move on you. So when you experience just a bit or slither of happiness- you can bet - they will appear, right on schedule, on time..ringing your doorbell, jumping out from those shadows, flying down from those rooftops, jumping you and wrestling you to the ground. Not a word is spoken because you know… Continue

Be Steps Ahead from your Devilish Functions 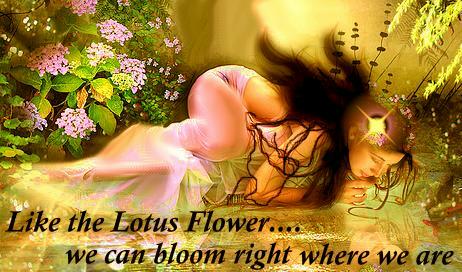 Today I had many thoughts and questions about devilish functions. Everyone knows what they look like or do they? They can be so transparent to some people. So obvious. Ever wonder why they keep disturbing us right where we live ( our financial pockets, relationships, etc).


For example, say your having money problems. Finding work. You book a show, a gig, a project, etc. You’re constantly finding ways to survive. So one day, you… Continue

On Karma and Buddha Nature

By Jeanny Chen
(Special thanks to Tamara Dixon) 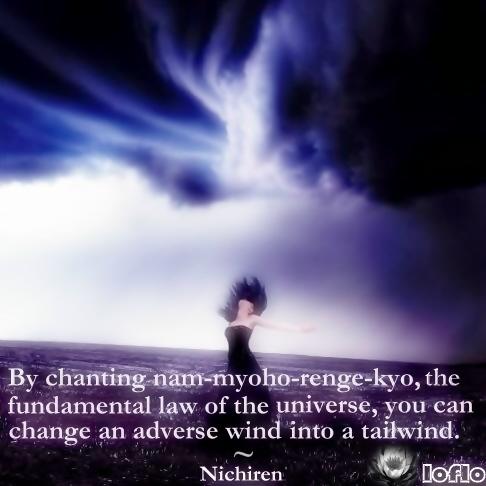 All my essays are aimed at the goal of sharing my personal experiences and understanding of a narrow area of this great Buddhist practice. They are not intended to replace any of the study materials. Please read them as a reference only. For a profound and thorough understanding of this Buddhism, I would strongly urge you to study the Gosho, Sensei's guidance and all SGI… Continue

Just saw UP! for the 2nd time, this time completely, and it was even better than the first time.

One of the best things about this film is that it shows what old people mean when they are saying certain things. "Don't touch that", why they seem so possessive and conservative about objects that do not mean that much anymore nowadays. The story starts out about two children and their hero, and the dreams they have and promises they make for later. Then romance happens- the two… Continue

Need some help from my Myoho brothers and sisters. I recently started my practice as a Buddhist and received my Gohonzon last month. I have been diligently practicing everyday. I have received many benefits so far seen and unseen to be exact. I purchased an awesome butsadan with all the butsagu to go with it to enshrine my Gohonzon. My question to you all is would it be wrong to include my Shakyamuni figurine on my altar? It would not be placed there to worship him, but… Continue

The ancient Masters were profound and subtle.
Their wisdom was unfathomable.
There is no way to describe it;
all we can describe is their appearance.

They were careful
as someone crossing an iced-over stream.
Alert as a warrior in enemy territory.
Courteous as a guest.
Fluid as melting ice.
Shapable as a block of wood.
Receptive as a valley.
Clear as a glass of water.

Do you have the patience to wait
till your mud… Continue

Just came back from the Ikeda Kayokai meeting in Zeist. What a great meeting that was! 108 young women gathered for the morning programme, with more arriving in the afternoon. Lots of growth, curious questions, initiatives. The MCs were all from South Holland, all YW that I am proud to be friends with.

Everything Begins with Prayer

'Everything Begins With Prayer' was the most important sentence that a fellow Buddhist passed on to me this month. I already knew it, but I have to post that sentence in a strategic place in my home to remind myself that before starting a project or a task of any importance I should first chant for guidance. (That even includes before packing for a work-trip, where I have tremendous stress from worrying about not bringing the right things.)

Chanting before action gives me the… Continue

Who is hindering your Growth?